Enjoy Netflix anywhere in the world with CyberGhost VPN

Let’s face it, over the past years, Netflix has slowly turned into a very important part of our lives. Whether we’re looking forward to relaxing after a hard day, watching something while eating or just leaving a few episodes of Friends on, as background noise, while doing some chores around the house, this wonderful service is there for us. However, you just can’t watch Netflix from any country you want.

Yeah, a bit. But let’s not forget that technology is here to help us. With a lot of things, including the ability to watch Netflix content from pretty much anywhere in the world. And that, at least for us, is really cool.

How does Netflix content differ from country to country?

The idea is simple: each country comes with a different catalog, mostly due to something called territorial licensing.

Basically, movie or TV show producers are looking forward to obtaining as much profit as possible, thus licensing their creation to different content distributors, from all over the world. Obviously, the one who bids the highest wins the rights. But this also means that it’s a bit difficult for Netflix to get rid of all geographical restrictions and make all the content available everywhere.

And this is how people like…well, us becoming frustrated, knowing that there’s a lot of great content available out there but we just can’t watch Netflix from any country.

But hey, did we mention above that technology is one of our best friends and can work its magic to make our biggest wish possible?

Yeah, we did. And now we’re going to find out why.

How to watch Netflix from any country you want?

Long story short, watching Netflix content from any country you can think of is far from being difficult. After all, everything you need to do is use a VPN and voila! All the Netflix in the world, literally.

A VPN, standing for a virtual private network, allows you to create a safe and secure connection to another network over the Internet. Simple as that.

It encrypts your online connection, protecting both your privacy, but also your security, which is a big plus nowadays.

To easier understand how the concept behind a VPN works, let’s imagine that, right now, you’re located in the United States. With a VPN, you can change the location of your connection and the network will see you like you’re using the Internet from, let’s say France, and allow you to access content otherwise available just in France. Pretty cool, right?

And by content, we also mean local Netflix titles!

We do need to mention some alternative methods to do this, like DNS tunneling or Smart DNS. The idea is basically the same as using a VPN, but we prefer sticking to the latter, as it’s easier to use. You’ll see in a few moments.

Here’s how easy it is to operate it:

So, these are the steps you need to follow:

See, told you it’s easy. But let’s take each of these steps separately and find out exactly how it’s done.

How to install CyberGhost VPN to watch Netflix

As mentioned above, we’re going to use CyberGhost VPN for this. And it’s pretty easy to explain why!

Besides being available for any operating system you can think of, through customized apps, CyberGhost VPN is all about privacy. Thanks to its no-logs policy, no information about what you do while connected will be stored, so you should have any concerns regarding this. Also, the service is using a combination of the safest protocols and AES-256 encryption technology, meaning that your digital life will remain impenetrable. Not to mention that you can use the same subscription on up to seven devices, at the same time…

Another important feature we should mention is the automatic kill switch. This means that if your internet connection goes down, this feature acts as an emergency stop, protecting your identity and all your information from any type of exposure.

And we’re not done yet!

CyberGhost VPN uses an extensive network of over 6100 VPN servers, from 90 countries, and has a background of 15 years, while the number of customers from all over the world already surpassed 36 million.

Right now, they have a you-just-can’t-miss-it offer available, so make sure you check it out until it’s not too late! 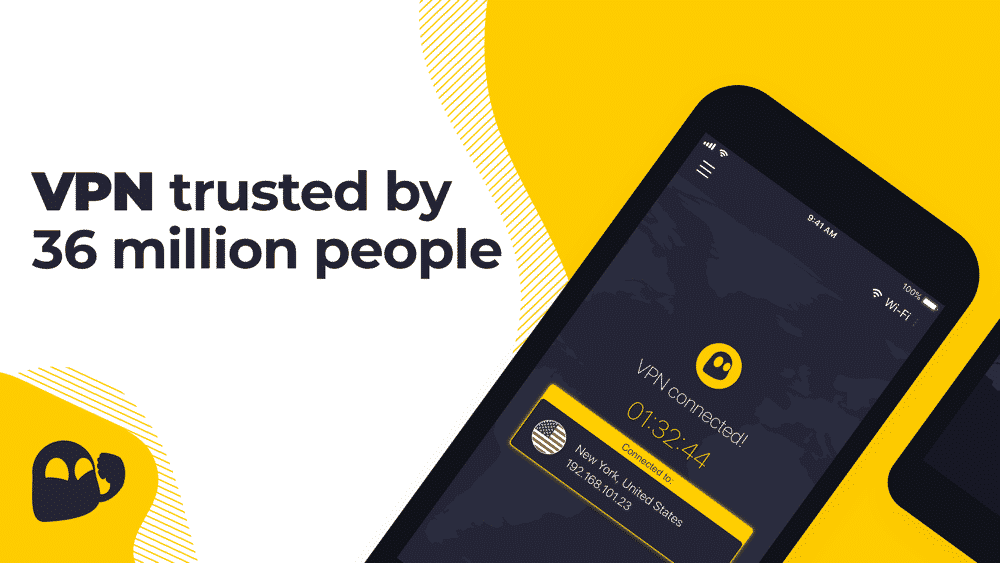 With the current offer, you can now CyberGhost VPN’s 3 years plan at just 2.64 € per month, which also includes two extra months for free.

Otherwise, you can choose between the three regular plans: 1 month, 1 year or 2 years. Check out all the details about the offers below:

After picking the offer that suits your needs, everything you need to do is install CyberGhost VPN on your PC or smartphone and switch it on. The interface is really intuitive and, after just a few clicks or taps, you will be one step closer to watching Netflix from any country.

Now that you have an up and running CyberGhost VPN instance on your device, it’s time to unleash its full power. In our case, to look for the country where you want to “move” and enjoy content from the local Netflix.

This awesome tool was built with people like you in mind and has a special section developed just for streaming. And it’s called – you’ll never guess it – “For Streaming”, located just in the main menu on the left.

Now that you have an up and running CyberGhost VPN instance on your device, it’s time to unleash its full power. In our case, to look for the country where you want to “move” and enjoy content from the local Netflix.

This awesome tool was built with people like you in mind and has a special section developed just for streaming. And it’s called – you’ll never guess it – “For Streaming”, located just in the main menu on the left. 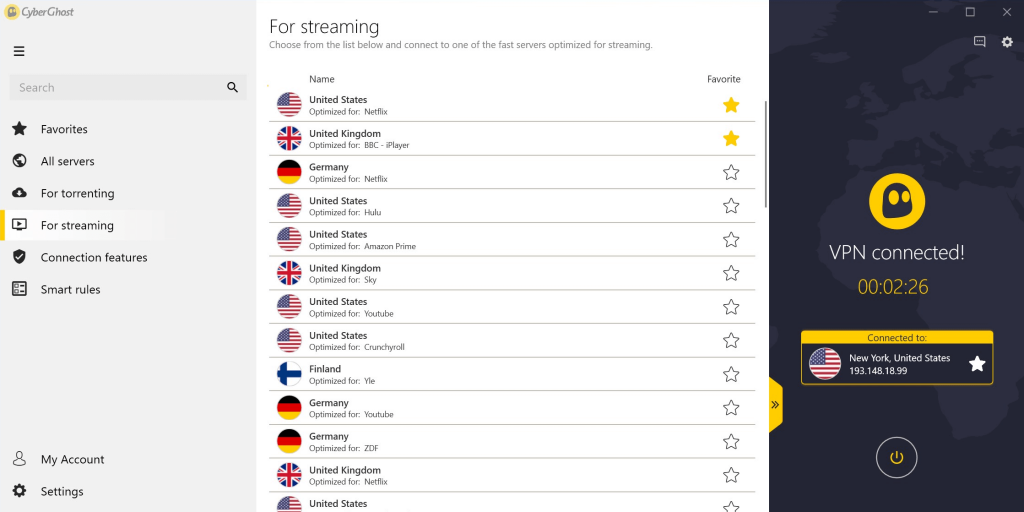 From this menu, simply select the country you want to navigate the web from and voila! you’re all set.

But, there’s still a but.

You can watch Netflix from any country you want but the problem is that it will be a real challenge to decide upon one country. However, there are tools for people like you, like uNoGS, which acts just like a search engine across Netflix libraries across the world.

IMDB rating, release year, genre and many other categories. It’s up to you to sort them.

Basically, you just need to make use of its filtering system and in just a few moments you’ll know exactly what country you should pick in CyberGhost VPN.

You’ll probably need some time to decide upon just one country, not to mention that something tells us that you will start making a list with all the countries you should check, after seeing all that cool and, until now, unaccessible regional Netflix content.

What are the downsides of watching Netflix from any country with a VPN?

While CyberGhost VPN is one of the best options when it comes to such services, watching Netflix from any country you want using it does involve some limitations. Nothing extreme, though, but enough to affect the overall viewing experience for some people.

For instance, it’s impossible to use a Chromecast to stream from your phone to your TV while connected through a VPN. Besides this, the speed of buffering might be affected, depending on which country you’re choosing to connect from. There are just a few to which this applies, but we felt that this needs to be mentioned.

Otherwise, there aren’t any other minuses at all. And hey, you have a ridiculously large video library at your disposal!

We bet that you are pretty excited right now, knowing that you can watch Netflix from any country in the world, without putting a lot of effort into it. In fact, it’s a matter of minutes until you have access to a humongous video library.