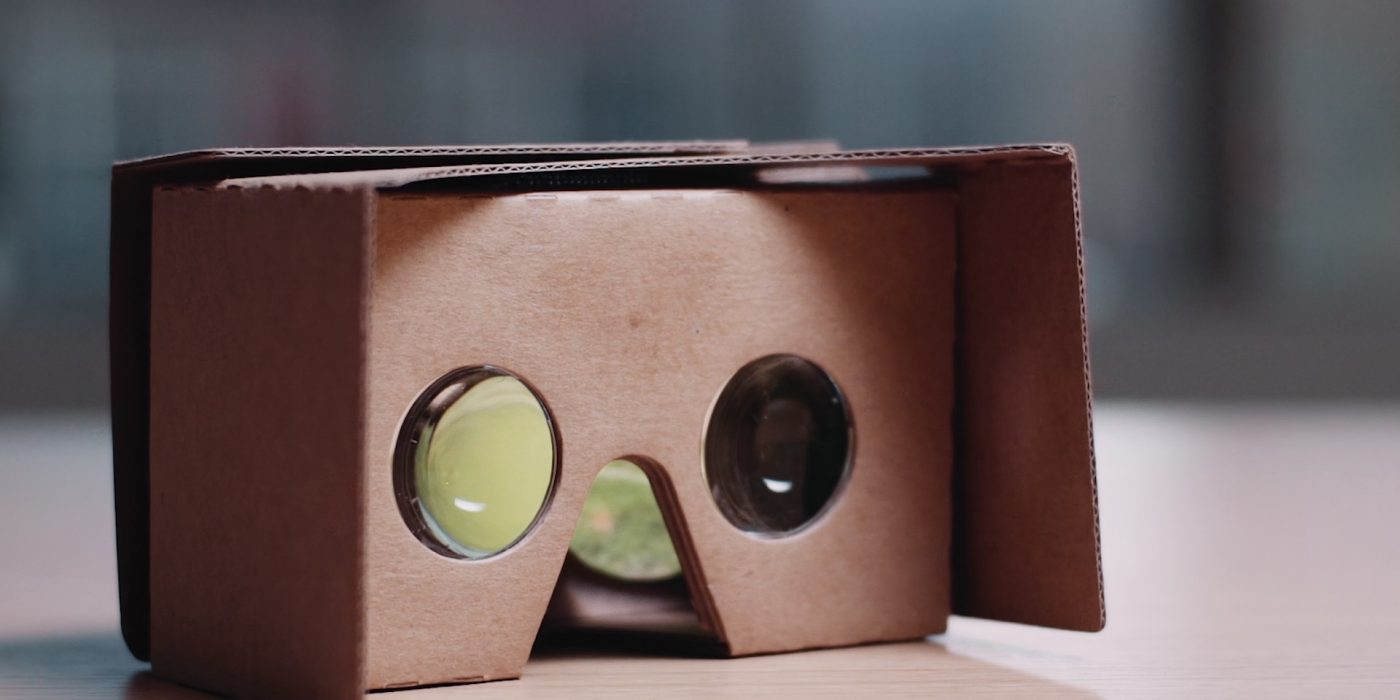 How can I use the CB Enabler for Gear VR?

Over the past few years, a lot of important players joined the virtual reality game, attracted by its huge potential. Basically, this would be an excellent thing, since more and more platforms and games became available for users to choose from. But things are not always all sunshine and butterflies…

The major disadvantage of this entire…variety is that the games for each platform aren’t compatible between them. Take Samsung’s Gear VR and Google Cardboard, for example. There are tons of awesome titles available for the latter, which Gear VR users would like to try, but it’s technically impossible.

When I got mine, I thought it would be great if there were a better way to get Cardboard apps running on Gear VR. And guess what? It can be done.

All hail to you, mighty devs!

A couple of brainy developers came with the solution for this: a Cardboard enabler. Or, as everybody knows it, a CB enabler for Gear VR. Curious about the way it works? Let’s find out together!

The idea behind the app is simple: it allows you to use any virtual reality content supported just by Google Cardboard on a Samsung Gear VR headset. Or, if you prefer a simpler explanation, it allows you to play Cardboard apps on Gear VR.. Pretty neat, huh?

The app comes with a couple of cool features as well, being able to improve motion blur. Automatically, this also improves the VR experience, as long as you keep those settings.

Google, why are you so mean?

Even though the CB Enabler for Gear VR was such a cool and useful app, Google didn’t want owners of Samsung’s headset to play its apps, so they axed it from the Play Store. Haters…

But there’s no reason to be sad, since the beauty of Android lies in the fact that you can install apps from other sources as well, as long as you have the APK file. If you don’t – most likely – you can get it below.

After getting the Cardboard enabler for Gear APK, you’re almost good to go, since it’s an app that allows you to use Cardboard apps almost natively on the Gear VR.

How to use the CB Enabler for Gear VR

Ok, so let’s make it clear: actually, there are three main ways through which you can use Cardboard apps for Gear VR:

As you guessed, the first one is our favorite, but the other two are also great alternatives. Let’s break them down in steps, one at a time.

Use CB Enabler for Gear VR

If you insert a phone into the Gear VR headset, the Oculus Home utility will automatically start. You guessed it, this makes impossible running any Cardboard apps, since you can’t exit Oculus Home. Sneaky Samsung is sneaky! 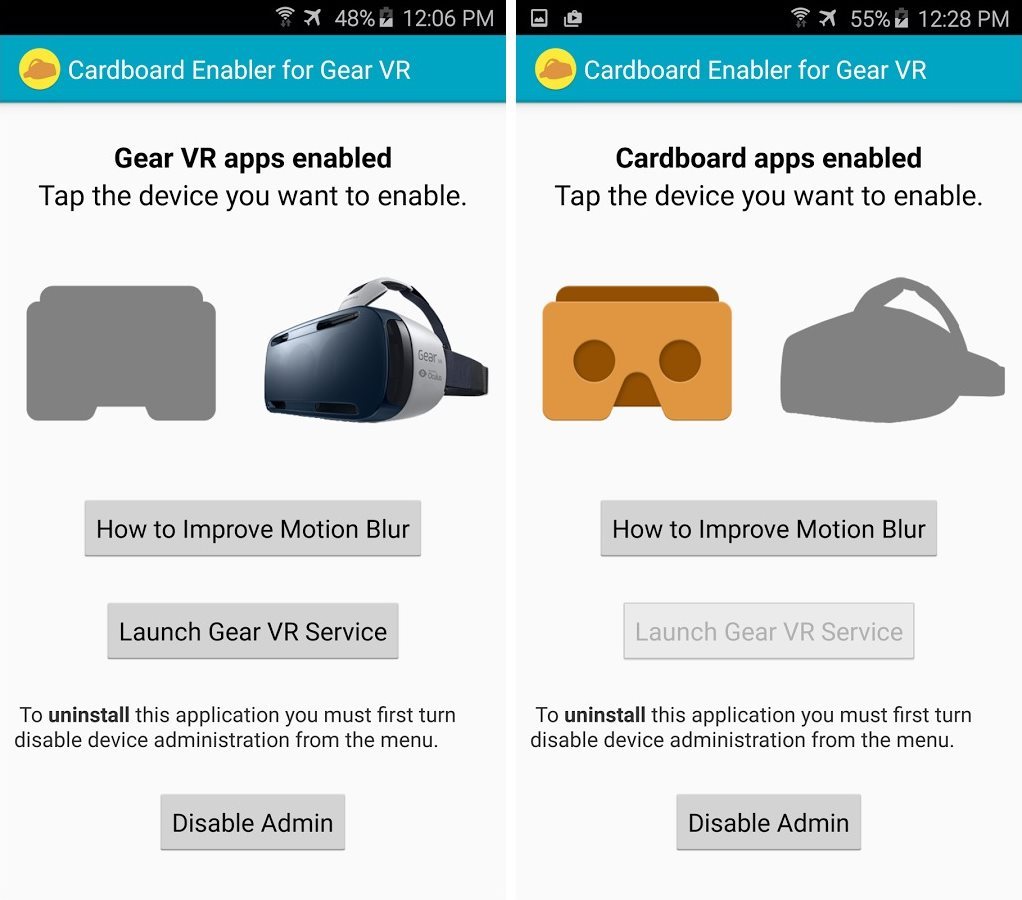 But this is where CB Enabler comes in, disabling this function. These are the steps you need to follow:

After you’re done playing, don’t forget to tap on the Gear VR icon again, to re-enable the Gear VR service.

This app, about which we’ve already discussed in the article about dealing with the Gear VR service app, works similarly to CB Enabler. Its minus, though, is the fact that it’s not compatible with the headset’s touchpad, so you can’t click on it. 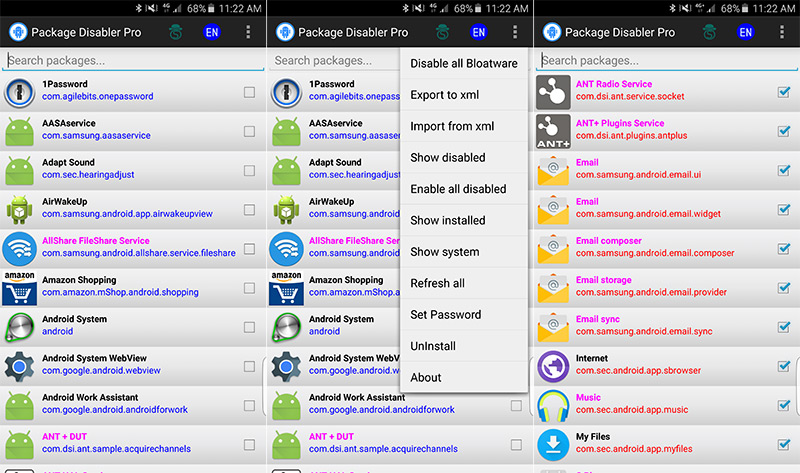 These are the steps you need to follow in order to set it up:

Just like in the previous method, make sure you re-enable the Gear VR service in Package Disabler Pro, if you want to use Oculus Home again.

This is basically a no brainer, which can be done without using any app. If you don’t plug in the USB port, Oculus Home won’t start anymore, since the phone is not connected to the headset. If you want a step by step explanation, this is what you need to do:

Even though this method sounds like the best, it actually has a big minus, since the phone won’t be centered properly, which makes the apps look a bit blurry. Not to mention that the phone can easily fall out of the headset.

And this is it, Gear VR users from all over the world. You have three ways through which you can play Google Cardboard apps on the headset. Of course, CB Enabler for Gear VR is definitely the best. Sure, the experience cannot be compared with the one offered by Samsung’s headset, but hey, the offer is way bigger!

How many of you tried this method? Let us know about your experiences, using the comments section below!