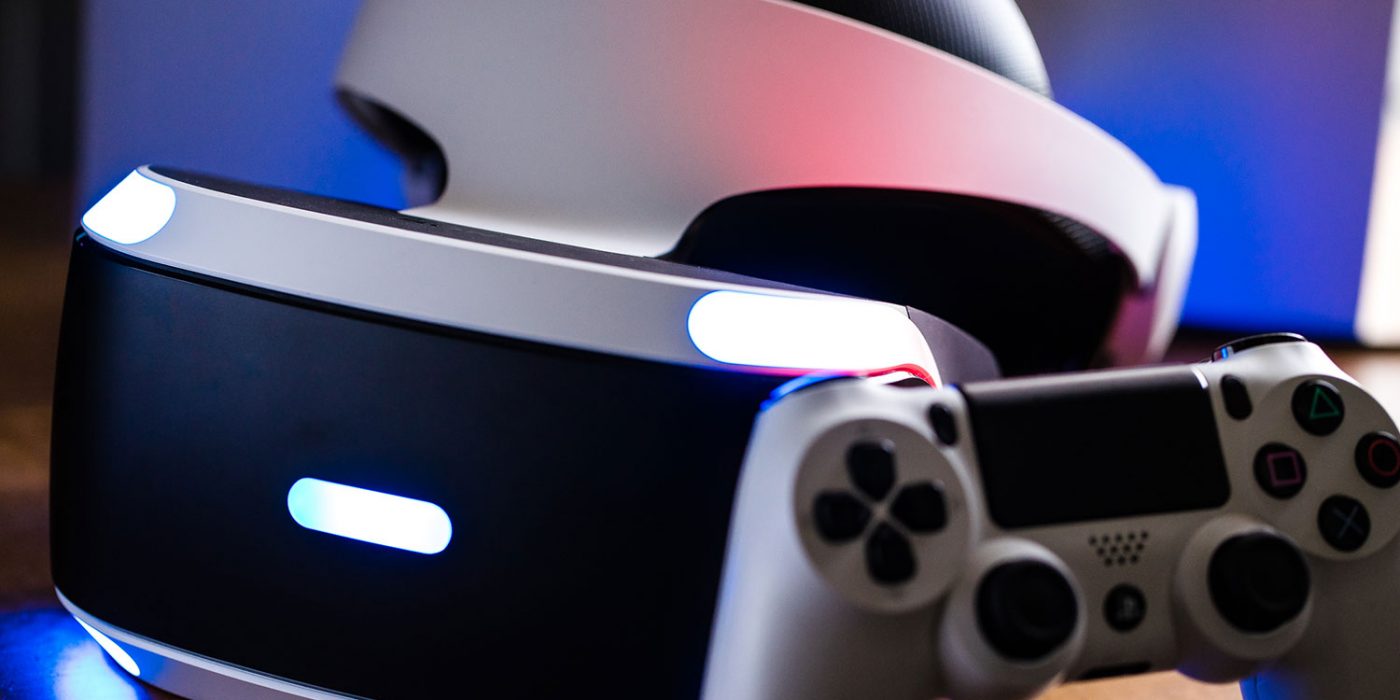 It’s been a great 2017 for the entire PlayStation VR ecosystem, as more than 100 unique experiences were launched, offering a top-notch virtual reality experience for users from all over the world.

And this in just one year since the official launch! But do you think they’re going to stop here? Wait until you see all the upcoming PSVR games…

Virtual reality saw a quick rise, so it’s not a surprise that the Sony VR headset attracted a lot of gamers from all over the world. And, as expected, developers were delighted!

Do you know what happens when developers are delighted?

No, they don’t start buying expensive cars with all that money they receive…

They keep making awesome games and build a lot of hype around them!

Luckily for us, the same thing happened in PlayStation’s case, so we’re looking forward to seeing some amazing PSVR games being released in 2018. After all, what better way to enjoy the full experience that to put on the headset and feel like you’re part of the action?

Today we’re talking about some of the best upcoming PSVR games, which are definitely worth checking out next year!

If you’re constantly asking yourself “What upcoming PSVR Games should I look for?”, you’re in the perfect place. Check out these awesome titles, coming soon to a console near you:

If you’re a Counter Strike fan (or any other FPS), you will totally love this one. Developed by the folks over at Mardonopool, Alvo is an online tactical VR first-person shooter, featuring close-quarters military combat. And it looks absolutely awesome!

The game will be announced in early 2018, for other major VR platforms as well, like Oculus Rift and HTC Vive. You can check out a preview below. Careful, it has a lot of violence in it!

After seeing this, I took a trip down memory lane and imagine how awesome it would be to play Counter Strike 1.6 (yeah, I loved it!) in virtual reality. Apparently, Alvo will offer a similar experience, so I’m definitely trying this one as soon as it’s out.

Even though this is more of a fan-only game, we’re absolutely convinced that it can become a real success. Based on the American adult animated science-fiction series Rick and Morty, the game is also expected to be unveiled in the first months of 2018.

The game will allow users to “experience life as a clone of Morty and all the trauma that comes with it”, according to the official announcement. And yours truly is totally diggin’ the ideas, as a big fan of the show he is.

A trailer was also released, just a few days ago, at PSX 2017, and it’s absolutely hilarious. Check it out:

A great game, for fans (and not only) with boxes on their faces, as Rick says. Seriously now, just for the sake of the trailer, which is absolutely awesome and full of humor, Rick and Morty: Virtual Rick-ality needs a chance! Now excuse me while I go and watch an episode.

Ok, episode over, let’s see what do we have next. Let’s look at the next entry in our selection of the best upcoming PSVR games.

If the previous two titles in our list will be available across multiple platforms, Golem is a Sony PlayStation VR exclusive.

You’re starting in a storybook, where you see through the eyes of stone creatures and control them. But this is not all, since you’re also trying to discover a connection between the Endless City, the place where you’re in, and your family. And it’s not going to be an easy mission…

This is what you should expect:

At first, the trailer really gave me the creeps, somehow reminding of Sisters VR, one of the best virtual reality games for iPhone and Android. Still, the way it presents how you can control golems is pure genius. Props to the one who had the idea!

Hey, are you up for another shooter?

Developed by Destructive Games, Megalith looks like an awesome hero shooter, where you control titans and, just like the tagline says, become a god!

It has one of those trailers for upcoming PSVR games that reminds me of a game I’ve played in the past, but I just can’t remember. What about you? Check it out:

The way that minotaur-like creature gets out of the cave and prepares to attack. Hmm, where have I seen this before? Oh, it’s Serious Sam! Only there you could fight such ridiculous looking creatures. Or am I the only one seeing this resemblance?

However, the idea is excellent and somehow creepy, so it’s obvious why this game is present on our list.

If you’re watching Game of Thrones, I bet that, at least once, you imagine how awesome it would be to actually ride a dragon. Come on, at least some of you want to be a Targaryen dragon rider…

Well, in just a few months, you will have the chance to do it. In virtual reality, that is.

One of the most interesting upcoming PSVR games is Dragonflight VR. Even though you’re now Khaleesi, you still get to engage in fast-paced combat and battle with a lot of opponents, from the back of a dragon.

Curious about how it looks? This is the official game trailer:

Just make sure you don’t meet some demon-looking dude as well, with an ice spear and a ridiculously good aim, able to take you down in one shot. I silently hope you got the reference.

Bow to Blood is one of those PlayStation 4 VR games we’re looking forward to after reading just its description. It’s a procedurally generated game, the scenario being set in a “fantasy reality TV show.” See? Told you it was cool!

Using your character, you must fly “high-end” airships, but also form alliances with other contestants or betray them. Hey, just like some people do.

This is the trailer for the game:

I know, the graphics are far from being the best, but it’s the idea and the storyline of the game which makes me recommend it. Let’s be honest, there are a lot of games out there worth playing just for the same reasons!

Living in the United States in the 1950s is something a lot of people imagine. If you’re one of them, we have some almost good news for you. You can do it soon, in one of the upcoming PSVR games, The American Dream, already available for other platforms.

Why “almost”? Because the game is actually a satirical trip – in virtual reality – through a society where guns are basically part of the daily routine. To be more specific, they’re used for anything, from opening bottles, watering plants or flipping burgers.

Sounds weird? We know. Check out the trailer for more details:

The graphics aren’t the best, but the voice-over was perfectly chosen, sounding exactly like radio and TV commercials from that period. However, we’re really curious to see that person who actually came with the idea for this game, which is so ridiculous that it really made us try and recommend The American Dream.

I remember having a real passion for rollerblading when I was just a kid, but it’s been more than 15 years since I did it last time. Most likely, I would fall down in less than one minute now.

Considering this, I’m really excited about Sprint Vector, one of the most intense PS4 VR games coming soon. Yes, soon, because it doesn’t have a release date, but we trust the folks over at Sony.

Curious about how the rides will look? We have a trailer:

It looks like the action is taking place at, let’s say, at least 2x regular speed, while the bright and vivid colors of the environment amplify the sensation. Just imagine how awesome would it be to play this game on a virtual reality treadmill… You would definitely lose some weight, without even getting out of the house!

Not a lot of major game publishers are putting that much effort into virtual reality, so Ubisoft definitely has a major advantage, thanks to all the PSVR releases in their portfolio. And they plan to keep going, the next addition being Transference, one of the oddest VR games ever. But we’re totally trying it when it’s released!

The storyline puts you in the minds of several members of a family, in your attempt to discover their secrets and repair their lives. But be warned, it’s far from being all sunshine and butterflies…

Check out the trailer, which looks like a smart horror movie:

We totally agree with the Transference developers: while playing this, you really feel like you’re in a movie.However, I’m a bit terrified about the man from the last sequence. “No matter how much it can hurt you, you are completely safe.” But this doesn’t mean that I don’t want to try Transference!

Xing: The Land Beyond

Described as a first-person puzzle adventure, Xing: The Land Beyond basically tells that you start as a dead person. And this isn’t very good, if you ask us…

The game is a walk through the afterlife, the story being revealed through poetry. I have mixed feelings about this, since the idea is definitely scary. But, at the same time, it’s also very interesting, a reason why the game made it to our top.

The environment and the landscapes are beautiful, but it doesn’t reveal that much about the action of the game, so it’s still surrounded by mystery. At least until it’s going to be released. Therefore, we’re very curious right now!

As soon as virtual reality started making it to the mainstream, we knew that nothing will be the same! Seriously, not even fishing!

With the last entry on our list with the best upcoming PSVR games to look for in 2018, we made an exception. Monster of the Deep: Final Fantasy XV was already launched, on November 21, but if you still haven’t tried it, it’s a must.

Even though the trailer doesn’t reveal so many details, it’s obvious that it gives fishing a whole new twist. And hey, it’s definitely fun to fight with underwater monsters, from the comfort of your home, right? And by monsters, we mean actual monsters!

The idea of going fishing as a character from a very popular video game is something I haven’t heard (nor imagined) before. Nevertheless, it’s crazy enough to work and become a real success, especially considering that the action is taking place in the world of the game. I wonder if it will be possible to do it as Archangel Tyrael, from Diablo 2, somewhere near the Kurast Docks…

If you want to see a list with all the titles coming out in 2018, you can check out the post on the official PlayStation blog.

I don’t know about you guys, but there are a few of these new PSVR games which I’m definitely trying, as soon as they’re going to make their debut!

Otherwise, we hope that you will do the same after checking our list with the most interesting upcoming PSVR games, expected to make their debut in 2018.

Which one of these titles are you looking forward to the most? Let us know, by dropping a few lines in the comments section below!